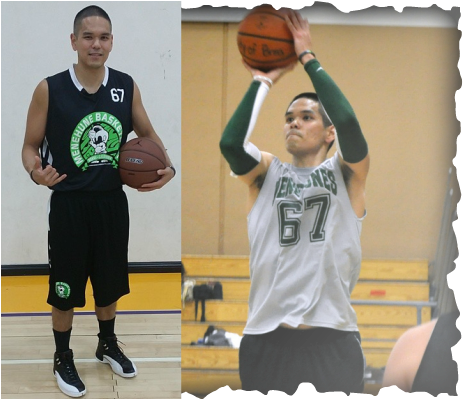 Photo by Coach Phillip Miyasaka (c)
Welcome to the Menehune Basketball Website.
​
We are an Asian American basketball team called  "Menehunes" that share a passion for basketball. We compete in various leagues and tournaments nationally. Menehune Basketball was started in California and has spread back to Hawaii. We have both Men and Women teams. You can click here view our results from previous tournaments/leagues over the years.

The Menehunes "Ohana" has grown over the years and now we have multiple Menehune Basketball teams for various skill sets in California. We are also affiliated with Prime Time Basketball Association in California and PTBA Youth.  We host our annual Menehunes Invitational Basketball Tournament the first Saturday and Sunday of August in Southern California.

I then returned home to Hawaii to start Menehune Basketball Hawaii (February 2016). We now have Menehune Basketball League Hawaii which features some of the best Hawaii ballers on the island. We are targeting our annual Menehunes Invitational Hawaii Basketball Tournament the first weekend of April.

About myself, I am the founder of Menehune Basketball, originally born and raised in Hawaii, attended Kaimuki High School (2004), went to California for college while playing on the NCAA Division 2 Men's Basketball team at Cal Poly Pomona (2005-09), and then attended Optometry School at Western University of Health Sciences College of Optometry (2013). Worked as the Chief Optometrist for the California Department of Corrections and Rehabilitation in Chino California and also had my own Independent optometry office in the City of Industry, CA (2013 to January 2016). I then moved back to Hawaii (February 2016) to join my family optometry practice, Anne K. Matsushima, O.D., Inc., in Kaimuki. So if you need an eye exam, you know where to find me. I also have 5 rescue dogs that I rescued off the streets of California (WUCO, Nubblet, Cookie, Budo, and Charlie), 2 birds, 3 tortoises, and freshwater fishes.

Thank you for visiting Menehune Basketball website. If you have any questions or comments feel free to contact us anytime.

Hope to see you around soon and as always, keep on ballin!
Mahalo,
James K. Miyasaka, O.D.

What is a Menehune? 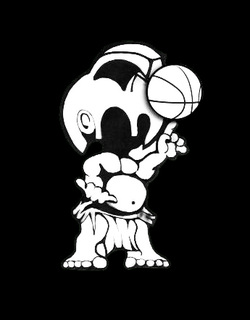 Designed by Ernest Ramirez
"Menehune" [pronounced meh-neh-HOO-neh] are said to be a people, sometimes described as dwarfs in size, who live in the deep forests and hidden valleys of the Hawaiian Islands, far from the eyes of normal humans. Their favorite food is the maiʻa (banana), but they also like fish.

The Menehune were said to be superb craftspeople. Legends say that the Menehune built temples (heiau), fishponds, roads, canoes, and houses. They are said to have lived in Hawaiʻi before settlers arrived from Polynesia many centuries ago.

In Beckwith's Hawaiian Mythology, there are references to several other forest dwelling races: theNawao, who were large-sized wild hunters descended from Lua-nuʻu, the mu people, and the wapeople.
Menehune Basketball