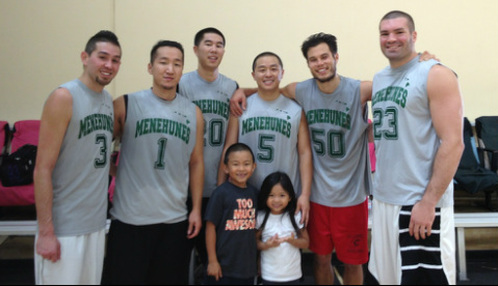 Game Summary:
Menehune-Pepes takes the Division I season opener this week by defeating Fukien by 10 points in Week 2 of the Fall 2012 Season.
Menehunes-Pepes had a 1-point lead at the end of the 1Q thanks to the efforts of #1 Andrew Der who alone scored 7 1st Quarter points. Fukien then came back and took the lead shooting 7 for 19 while Menehunes only scored 4 of their 22 shots, resulting in Fukien having a 6 point lead at halftime. In the 3rd Quarter, Menehunes-Pepes got back in motion and had a slightly better time shooting making 8 of their 22 attempts, while Fukien just had 5 of their 15 scoring a low 11 points in the quarter and losing their lead being down 6 at the end of the 3Q. Rebounds were the game decider, where Menehunes-Pepes grabbed a total of 58 rebounds compared to Fukien's 31 for the game, allowing more 2nd chance opportunities for MP to score, eventually ending with a win for them this week.
Fukien was led by #13 David Kalb (28 pts, 12 rebounds) and #9 Larry Tizu (22 pts, 6 asts, 3 rbds).
Menehunes-Pepes' leaders were #5 Raymond Hong (27 pts, 2 steals, 8 rbds) and #1 Andrew Der (14 pts, 10 rbds).